Tres Leches Cupcakes ~ Dunk it, pump it or drizzle it.  Whatever method you use to infuse your  Tres Leche Cupcake (“three milk cupcake) is fine.  Just be sure that one of the three milks is coconut milk. Then finish off this dairy-dream cupcake with some dulce de leche buttercream frosting, a little dusting of chocolate shavings, and you’ll be peeling away the cupcake wrapper faster than a kid with a…uh, cupcake. 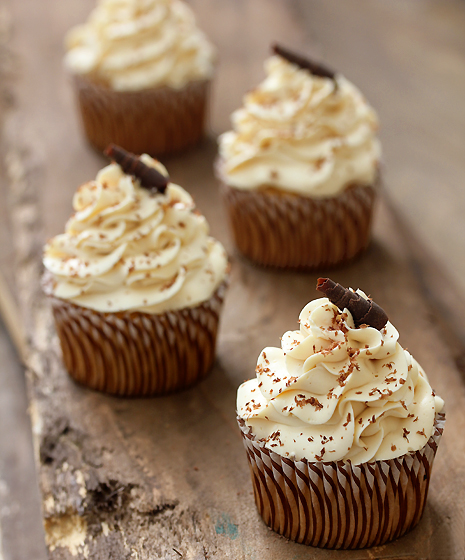 Last week I was huffing and puffing about my laziness and I was all about turning out desserts that I couldn’t eat in order to save the stretched out seams on my fat jeans.  Then I realized . . . boring! Who wants to make desserts and not partake? Maybe once, maybe twice but beyond that is madness!

Okay, I’ll admit, I’m balancing my sweet butter cravings with a pair of Nikes and Foster The People stuck on repeat. Adding to that, lucky for me, my SIL Molly is a kick ass Beach Body coach that I’m guessing after being on her regimen for 4 weeks, my muffin top. . . .Well, it’ll be optional.

Now here’s an option for you: I’m helping to promote this post, so if you’re inclined, take a hop over and give a bark to this totally adorable blogger and her dog. They are  checking out Purina’s Pro Select Plan. And serioulsy, how freaking cute is Connor? Pssst. . .  there’s also a $100 Visa card giveaway going on over there!

*NOTE: The consistency of the dulce de leche frosting will depend on how much or or how little you add of the dulce de leche sauce. I’ve written the recipe as 1/2 cup – 1 cup to account for varying ducle de leche consistency that can run on the thinner side when purchased from the store versus making a homemade version that is usually thicker. I recommend starting with 1/2 cup and mix to combine then taste and add more if needed.