I know long name, but trying to be creative a 1:30AM is not working out too well – but at least the bark did. 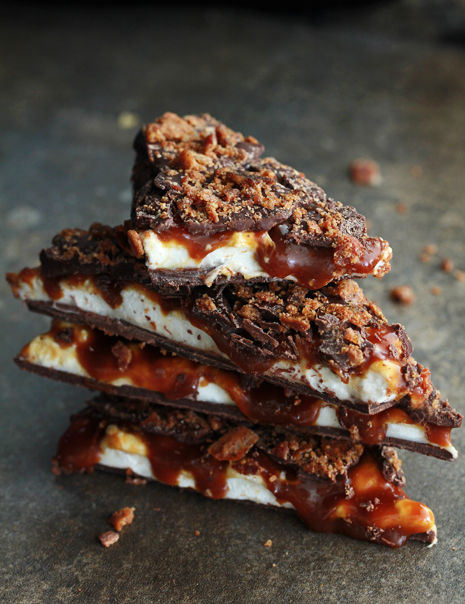 Full disclosure: This one won’t ship as well as the other bark recipes, but trust me when I say it will be well received! It’s hard to go wrong with whiskey, caramel, marshmallow and bacon! Isn’t bacon like the great enhancer? Yes, I think so.

So in keeping with the fuss-free theme of the Holiday Bark Series, I took a shortcut with the marshmallows and used store bought mini marshmallows instead of pulling out the thermometer for a homemade brew. Guess what? It turned out just fine when I added whiskey to the slightly melted marshmallow.

As for the bacon, well if you know me, then you know I love a good sweet and spicy bacon crumble (. . . . remember these cupcakes)? And that’s sweet and spicy as in sugar coated and kicked up with cayenne and black pepper.

Last note before I send you over to Endless Simmer for the recipe, as many of you know I usually make my bark with dark chocolate, but for this recipe I wanted a more neutral chocolate so that the whiskey would come through nice and strong. With that I used a semi sweet vs. a dark chocolate.

Now hit the jump for the recipe.