Two of my favorite desserts come together for Steph of Cupcake Project and Bethany of Scoopalicious’ annual Ice Cream Cupcake Contest. I’m so honored they asked me to a judge with Nicole Weston of Baking Bites, and Jessie Oleson of CakeSpy. 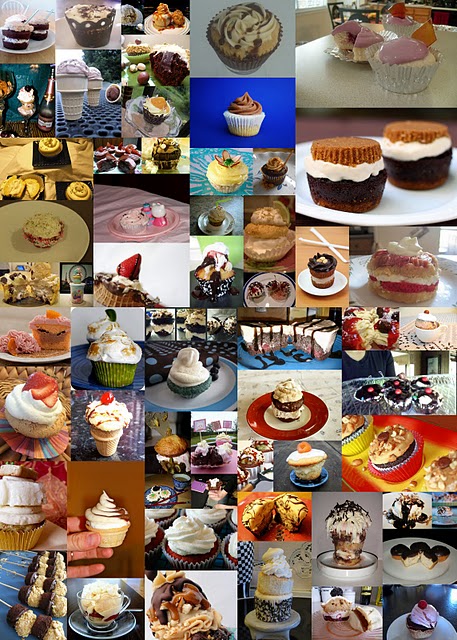 After drooling over sixty entries and inspired by all the creativity, I’m burning to churn and bake my own dynamic duo to fold into a cupcake liner. I’m sure you will be too so hit the jump here to take a look at all the entries.

But since this is a contest, I had to select my top three picks. My criteria was based on flavor and creativity, keeping in mind that each entry had to contain both cake and ice cream. My picks will be used with the other judges picks to narrow down the selections to one grand prize winner that will be announced at the end of the month.

Here’s are my top picks (in no particular order) : 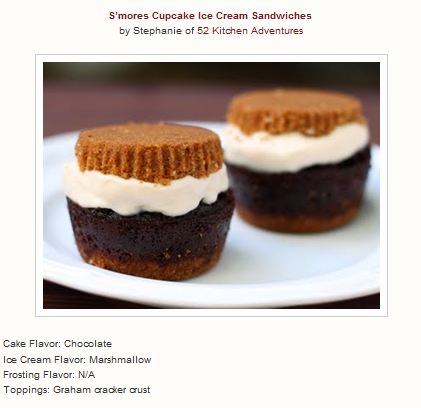 S’mores Cupcake Ice Cream Sandwiches, by Stephanie of 52 Kitchen Adventures. This is such a unique and creative way to work in graham cracker beyond the cursory dusting I so often see on other S’mores  cupcakes. 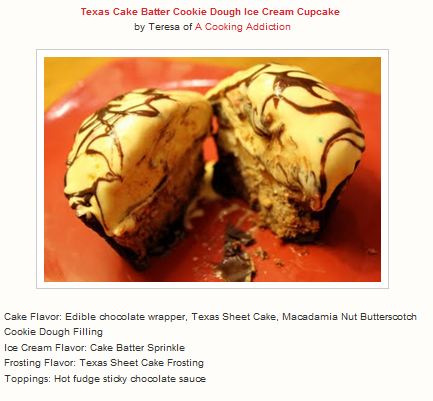 Texas Cake Batter Cookie Dough Ice Cream Cupcakes by Teresa of A Cooking Addiction. Great concept from start to finish. The edible chocolate wrapper—love it; and instead of coming across as too busy, I like the way the all flavors are stacked one on top of another. 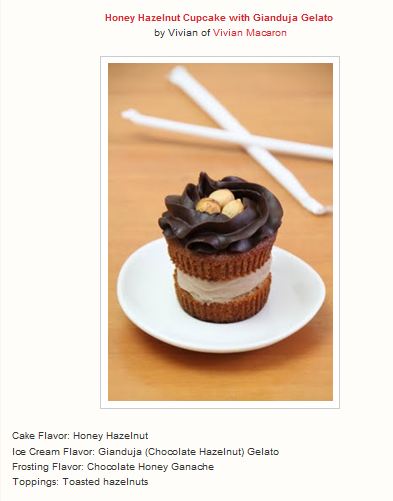 Honey Hazelnut Cupcake with Gianduja Gelato by Vivian of Vivian Macaron. I love the use of gelato vs. ice cream as the backdrop for the Gianduja flavor. The denser,  creamier texture  of gelato couples nicely with the cake and provides a good balance to the strong Gianduja taste. 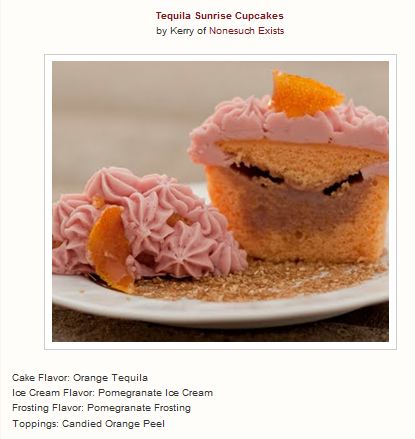 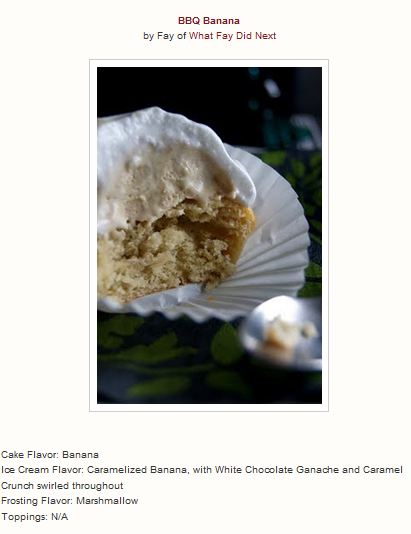 BBQ Banana by What Fay Did Next

And because narrowing it down to just three was so difficult, I have to mention two runners-up. Tequila Sunrise by Kerry of Nonesuch Exists. This one is like a cocktail, ice  cream cupcake with its orange tequila cake and pomegranate ice cream and frosting. BBQ Banana by Fay of What Fay Did Next. Love the simple inspiration behind the creation of this banana cake and caramelized banana ice cream with white chocolate ganache.  And as if that wasn’t enough, the topper is a marshmallow frosting.