Spiced Pumpkin Cheesecake with Bourbon Whip Cream~ This is the kind of pumpkin cheesecake recipe that will melt in your mouth. It’s full of fall flavors and spices like nutmeg and candied ginger, add in a chocolate pumpkin layer and you have a dessert that begs to be your pumpkin kick off recipe. 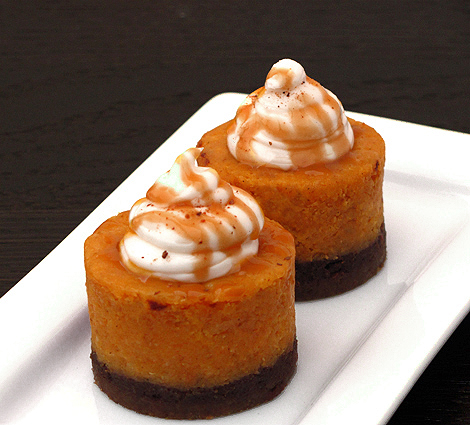 How do you decide what recipe is worthy when there’s a pumpkin shortage? Don’t start by sitting down and listing all your pumpkin recipes, unless you are prepared to be overwhelmed and frustrated by your inability to settle in on “the one”.

You go for it. Grab your bowl, measuring spoons and cups and dive right in, even if you have no ingredients for the crust. Did you notice? Yeah, I had nothing, not even graham crackers.

As it turns out, we didn’t miss having a crust at all in this pumpkin cheesecake recipe. The cheesecake is bursting with flavors, especially fall flavors. If you decide on making a crust, try using a gingersnap crust for added flavor.

Since the recipe only calls for 1 cup of pumpkin puree I still have enough for another pumpkin recipe. I’m hoping that from what I have been reading that the pumpkin shortage will soon be over and the sign on my local grocer’s shelve will be replaced with a rows of Libby’s canned pumpkin.