Pink Meringue Kisses ~ Light and almost ethereal these meringue kisses have been slightly tinted pink for a Valentine’s dessert touch. 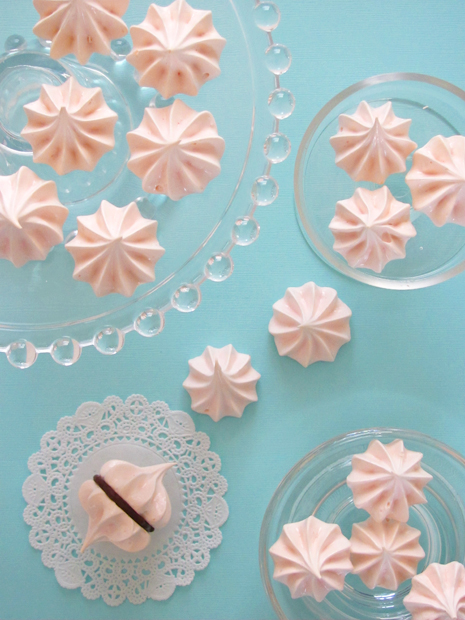 I also made one with chocolate as a variation, but left the rest plain since that’s how Matt likes them. As for me, I have to admit, I’m not a meringue fan. I love the way they look and I love to make them, but I don’t like the texture.

This is a useful and easy 4-ingredient recipe to have on hand, especially when you have egg whites that need to be used-and I had some leftover from my Caramel Pot de Crème recipe. Although, those exact ones were not used in the merignues you see in the picture.

In fact those eggs whites went in the trash along with the first round of finished meringues. See, meringues are touchy little things. The slightest moisture will zap out all crispness and turn your meringue cookies into a sticky mess.

I actually made this recipe on Tuesday night and had intended on shooting them early Thursday morning before work, that is, until I got home from my 9-to-5iver and realized I had a sticky mess.

While I had left the meringues in an airtight container, Matt had unknowingly moved that container next to a window with full afternoon sun. That was all the meringues needed to come undone. The container had turned in to a little hot box and had morphed the crisp little puffy pink bites into a sticky mess.

Let me say it has been the kind of week that by midday Tuesday, I wanted to hit the fast forward button. I had a sick little guy, two bake failures, a melted silicone bake form-even though the tag said oven safe(and yes, I’m sure the fumes released when it melted was completely non-toxic, right?) after all that, I had sticky meringues that made me want to cry.

Alright, the pity party has officially ended moving on . . . Anyone ready for the pretty meringues that did turn out crisp and light!

Preparation: Line to bake sheets with parchment and heat oven to 175 degrees F

1.  Place sugar, egg whites and tartar in a bowl over (not on) simmering water. Constantly whisk the egg whites until the sugar has dissolved.

2. Pour the egg mixture into a clean bowl. Using a whisk attachment on a stand mixer or a hand held mixture, slowly beat egg mixture. Gradually increase speed and continue to beat mixture until stiff peaks have almost formed. Mixture is ready when whisk attachment dipped into mixture leaves a curled but stiff peak when removed.

3. Transfer mixture to a pastry bag fitted with a close or open star tip and pipe ½ inch to ¾ inch wide cookies, making sure to set them one inch apart from one another.  Bake at 175 degrees F for 1 ½ hours, then turn off oven and leave the door slightly ajar for meringues to cool down with the oven.  Store meringue cookies in an airtight container away from any heat or moisture. Alternatively, store them in the freezer where they can be enjoyed straight from the freezer without any defrosting.