Mini Banana Cream Pie ~ A classic pie gets simplified and individualized in a cupcake liner. This might just be the easiest pie to make-ever! Throw all your ingredients in a blender or a food processor and process, then bring it to temperature–pour, chill and serve. Done. 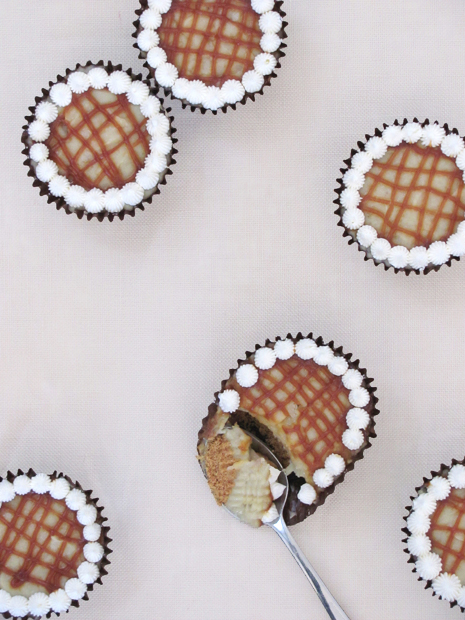 It’s been a while since I made a banana cream pie. In fact it’s been years. I’m not sure what really made me crave it all of sudden. Now I’m a little obsessed with it.  I actually made it twice this weekend, partly because I ate 1/3 of the pie and then dropped the piece that was perfectly sliced for the picture. Getting a perfectly sliced piece wasn’t easy, especially since the filling is a custard and that does not usually go hand in hand with nice clean cut lines.

The only problem was I didn’t have enough individual pie pans, so I used cupcake liners instead and you know what? I’m so glad I did! Let’s face it, it’s hard to turn down anything from a cupcake liner—goodness can always be found between the pleats.

1. Place graham cracker crumbs, toasted coconut shreds, toasted pecans and sugar in a food processor bowl and pulse to crumble. Alternatively, you can place all ingredients in a baggie use a rolling pin to crumble the mixture.  Add melted butter and mix to combine.

2. Place 1 ½ tablespoon of graham cracker crust mixture into bottom of cupcake liner. Use the bottom of a glass to press mixture down. Bake crust for about 6-8 minutes or until golden brown.

1. Place all ingredients in food processor bowl or blender and process to combine. Pour mixture into a saucepan over medium heat and cook until mixture starts to bubble, making sure to constantly whisk. Continue to cook mixture until it thickens, about 5-7 minutes. Remove from heat and let cool slightly.