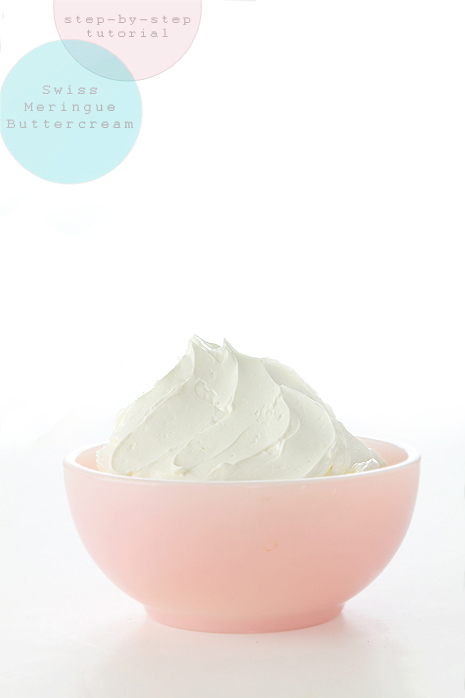 By minor variation, I mean the ratio of egg whites to sugar and the amount of butter. Along with that, there is also some variation on the temperature of when the egg white and sugar syrup is ready for whipping. That said, I’ve outlined the ingredients and tools used to make Swiss meringue buttercream and what works for me and provided some links to support it.

Temperature: I bring my egg whites to 160 degrees. I have never gone as low as 140 degrees F as Epicurious suggests. I did at one time use 150 degrees F as Martha Stewart does, but nowadays, I heat my egg whites to 160 degrees F.
At one time I thought I discovered something by accidentally taking my eggs whites all the way to 160 degrees F without compromise to the end result. By accident I mean, I was making meringue and Tweeting – don’t be like me. Multi-tasking and heating eggs usually results in scrambled eggs. In any case, a few weeks ago I was reading The Baker’s Dozen and there was a recipe from my favorite baker, Alice Medrich, instructing meringue to be taken to that exact temperature. My accident was only a new discovery to me.

The 160 degrees F is Alice’s Safe Meringue featured in her book “Chocolate and the Art of Low-Fat Desserts” of course this is the one of two books I do not own hers. (If it isn’t already obvious, the word low-fat in the title nixed it for me.) Her Safe Meringue recipe is also featured in another one of my favorites, Shirley Corriher’s, “BakeWise: The Hows and Whys of Successful Baking”. If you haven’t read this-you need to! Go checkout it out at the library or better yet – buy it, read it, dog ear it and mark it up with notes. I think you can feel good about the safety of egg whites at that temperature if a biochemist like Shirley features Alice’s recipe in her book.

*Thermometer: Is it necessary? That depends on where you fall on the safeness of eating egg whites. To be on the safe side, if you don’t have a thermometer use pasteurized egg whites and use the finger method to test for readiness.
The finger method is simply rubbing the egg and sugar mixture between your fingers to feel for sugar grit. If it’s smooth, then the egg white mixture is ready for beating. If it feels sandy or gritty, keep whisking the mixture until it is smooth.

Egg whites and what type: I have used pasteurized egg whites, but I couldn’t achieve the same fluffy light texture as when freshly separated egg whites are used. Full disclosure: I tried it twice and didn’t like the results, so I never went back to it. But that means nothing. It’s better if you test the two for yourself to see what your preference is. You should check out what Rosie of Sweetapolita has to say about her experience with it. She also has an excellent post on the same subject, titled “Swiss Meringue Buttercream Demystified”.

Sugar: Don’t bother using expensive baking sugar. Regular granulated sugar will work fine since it will quickly be heated to a liquid state.

Beating the egg white and sugar syrup to a meringue state: The time it takes to beat the egg white and sugar syrup into meringue may vary slightly from what is in the recipe based on different types of mixers used. For a more tactile indication of readiness the meringue should be warm to the touch. If not, the butter will melt. The visual indication will be stiff peaks that form when the whisk is pulled up out of the meringue.

Butter: The butter needs to be at room temperature, softened. The best visual description I’ve read is from Alice of Savory Sweet Life’s excellent post on “Classic Buttercream Frosting” – “The texture should be similar to ice cream, soft enough to scoop but firm enough to hold it’s shape.” When cutting the butter into pieces, I just roughly cut it to the tablespoon marking on the wrapper.

Ratio: In terms of ratio, I prefer mine at 1 egg white for 2.1 oz of sugar and 3.2 oz of butter. If you don’t have a scale it works out to about a 1/3 cup of sugar to every egg white. If do measure by cups your ratio will be slightly over by 1/2  an ounce, but it won’t matter for this recipe. For the butter it will be about 61/2 tablespoonfor every egg white.

Flavoring: This buttercream is highly adaptable to flavoring by extract or by sauces, eg. melted chocolate, melted white chocolate, caramel, dulce de leche, fruit curds and more. I generally add a 1/3 cup or more of sauce for every batch and extracts vary from 1/2 teaspoon to more. Taste as you go, just remember it’s always easier to add more flavoring than to reduce the flavoring.

Coloring: Start slow—it’s always easier to add more color than to correct the color. How much to add depends on the brand and the color. I generally start with one to two drops (one drop if I’m unfamiliar with the color), then mix it well and add from there as needed. Make sure as you add the color you are squeezing the drops out onto a spoon not over the bowl to have better control.

Trouble shooting: This portion addresses some of the questions and issues I have received regarding the Swiss meringue buttercream.

My Swiss meringue buttercream is soupy.

My Swiss meringue buttercream is curdled.

Can I use this frosting for a wedding taking place outdoor in the summer?