I’m back with another round of Valentine’s macarons. There is just something about macarons that brings out my wanna-be artsy persona. 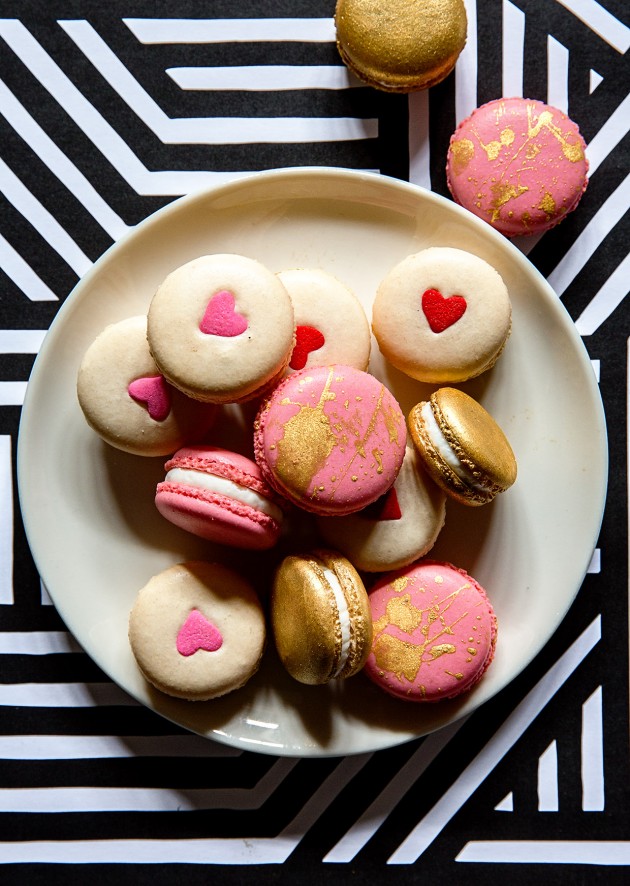 It’s not often, but once in awhile like with these macarons, I had the photo worked out before I actually made the food. That background is actually wrapping paper. I saw it, loved it and knew I wanted to make a batch of Valentine colored macs to shoot it on.
The result were these macs here and the black cherry macaron from this post. The latter kinda took on a life of its once I gilded one shell. What initially started out as one post, turned into two. I even went so far as to create a custom background for those gilded ones?
You are probably asking, “Who has time for that?”. I don’t and didn’t, but I did it anyways and then forgot to pick up my son from school in the process!! Eep. To make matters worse, I almost did that again the next day – more on that in a coming post. 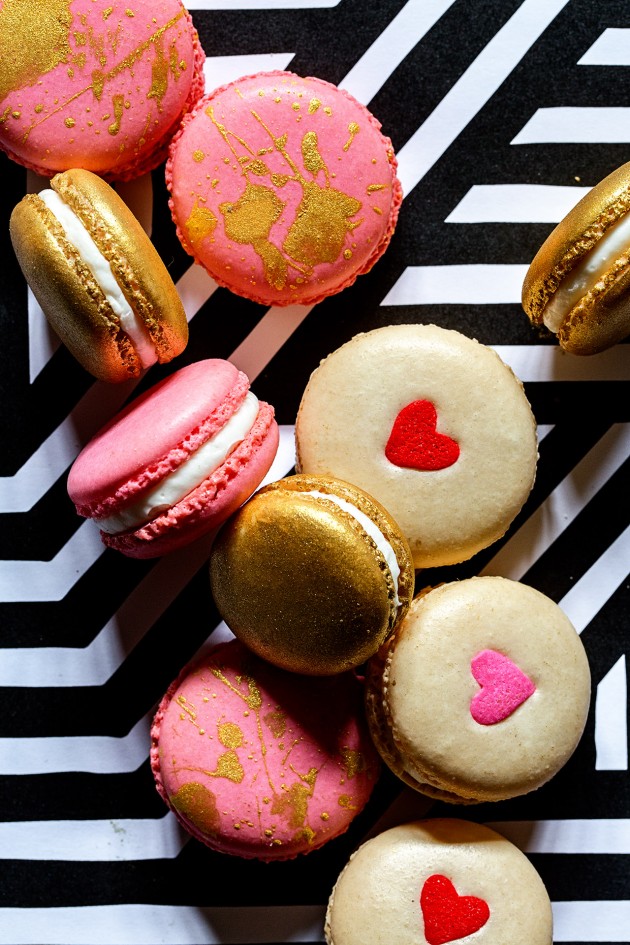 Where am I going with all this? Apparently no where but sharing a little bit into my creative process of how something as small as wrapping paper can inspire what I bake and make.
As for todays macarons here – squeal – I love them. I hope you enjoy them as well. Recipe below and a few tips for successful macaron making here.

To make the paste: In a large bowl, sift together almond flour and powdered sugar. (If using powdered food coloring, mix it now.) Add the egg whites and fold until mixture resembles a paste (If using colored food gel, mix it in now).

To make the meringue: Place  sugar in a small sauce pan and pour the water over it. Do not stir. The sugar will absorb the water. Turn heat to medium high, clip a thermometer to pan and cook without stirring. Using the handle of the pan swirl pot every once in a while. Bring mixture to 240 degrees F.

Add half of the meringue to the paste and fold to combine. Add in remaining meringue and fold until batter resembles thick cake batter.

Transfer batter to a pastry bag and pipe onto Silpat. Rap baking sheet on the counter top a few times to get rid of any excess air bubbles.

Bake macaron cookies one tray at a time until macarons do not give when gently pressed and easily peel away from Silpat. Remove from oven and let macarons cool on baking sheet.

To make filling: Placed chopped white chocolate in a medium heatproof bowl and set aside. In small saucepan over low heat, pour cream in and scraped vanilla bean Cook and stir to a gentle simmer. Remove pan from heat and pour over chopped chocolate. Let mixture sit for 2 to 3 minutes. Using a sturdy spatula stir mixture until chocolate is melted and mixture is smooth. Plastic wrap directly on the surface of the ganache and transfer to the refrigerator to to chill and thicken for at least 3-4 hours or as long as needed to pipe to thicken consistency.