I’ve been sick, real sick. I was down for all of last week with the flu. I stayed home from work and didn’t do one bit of blogging. Now for a person who is use to constant movement that was hard. But my body fought against me and just wouldn’t allow my baking hands any exercise.

So of course coming out of a week-long baking absence, I wanted to make something cheerful. Cupcakes always do the trick for me. I’m not quite sure what it is, but they always make me smile.

This is a simple cupcake idea using some of my favorite basic elements like my go-to classic chocolate cupcake and my go-to vanilla frosting. The only thing I did different was to carve the frosting into some roses for a Valentine’s cupcake theme.

I wish I had set-up the shot better so you could see how simple the piping is from the side, but the bad lighting in that first shot washes everything out. Truth be told,  I had 10 minutes to photograph this morning. It shows—not my best work. And as you can tell I couldn’t settle on any one style for the shot. The composition in this second shot is all wrong and the bright white background I had intended is a dingy grey. 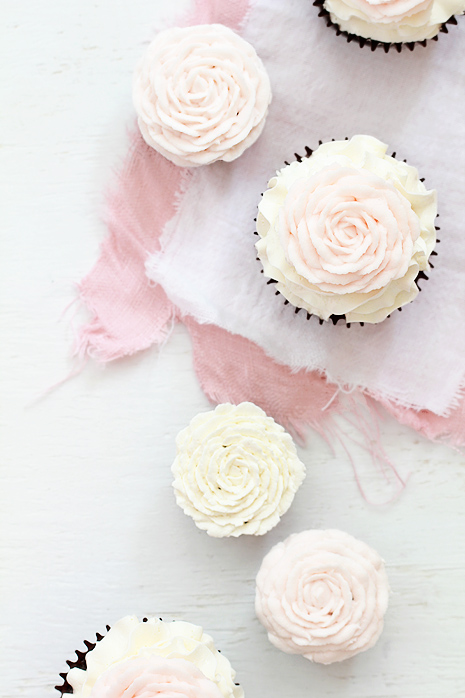 Don’t be intimidated making these.  Rose cupcakes are so much easier than you may think. I started by creating a white base of ruffles with Wilton’s 2D tip and then using an offset spatula to flatten the top. After that I used Wilton’s #104 tip  to create a rose. Here’s is Wilton’s tutorial. I will be posting a video next week, since I’m assuming I can’t be the only one who likes seeing instructions in action.

Makes 12 cupcakes | Preparation: Position a rack in the lower third of the oven. Heat the oven to 350 degrees.

1. Add flour, cocoa powder, sugar, baking soda, and salt in a blow and mix thoroughly to combine. Add the butter, eggs, and vanilla and beat on medium speed for one minute. Add the butter and egg mixture and beat for 20 seconds. Scrape the sides of the bowl and add the hot coffee. Beat for 20-30 seconds until the batter is smooth. The batter will be thin enough to pour. Divide it evenly among the lined cups. Bake 18-22 minutes just until a toothpick inserted into a few of the cupcakes comes out clean. Set the pan on a rack to cool. Frost the cupcakes when they are completely cool. Store and serve at room temperature.

TIP: For light tender cupcakes, spoon flour and cocoa lightly into measuring cups (instead of dipping the cups into the flour or cocoa) and then sweep the measures level without tapping or shaking them.

1. Combine egg whites and sugar in a bowl placed over simmering water. Bring mixture to 150 degrees F while whisking constantly.
2. Transfer mixture to stand mixer bowl, fitted with a whisk attachment and beat on medium speed until mixture cools and doubles in volume.
3. Add butter in one piece at a time, mixing to incorporate after each addition. The mixture may appear clumpy and almost curdled looking-this is normal. Keep mixing and it will become even and smooth again. Add salt and vanilla and mix to combine.