A few weeks ago, I took a trip to New Mexico with the family and explored Santa Fe extensively. The trip was part of New Mexico’s True Flavors campaign. 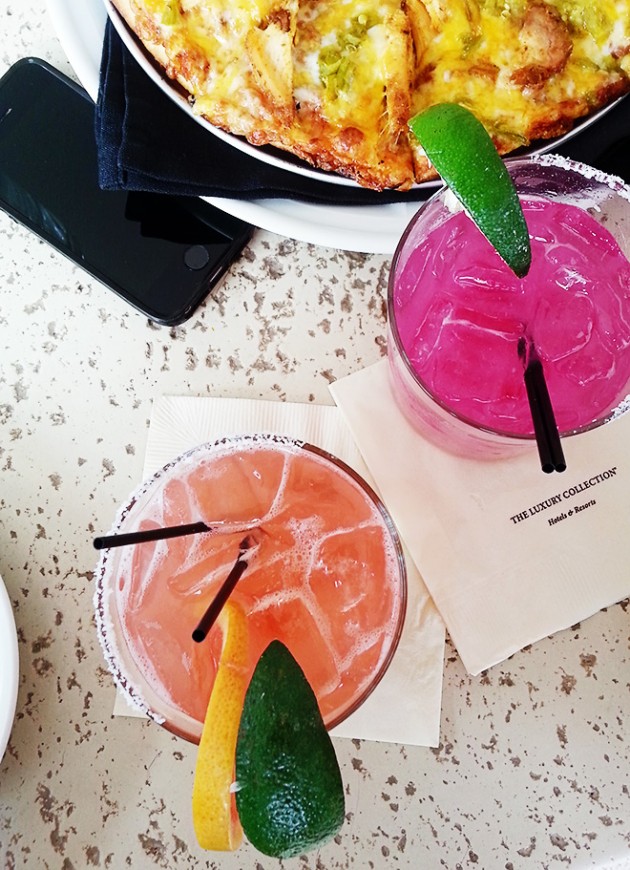 That being the case, let’s start this travel piece with margaritas—because admittedly, it is the most memorable.

Let’s do this . . . Part I of a three part Santa Fe Travel Series. Yes, three parts, because there’s so much to share (recipes included, so don’t get squirrel-y).

Now with all the preamble out of the way, let’s do drinks at some of Santa Fe’s best destinations (I’m only doing drinks and food today, we will talk about the fabulous hotels associated with the restaurants in the next installment): 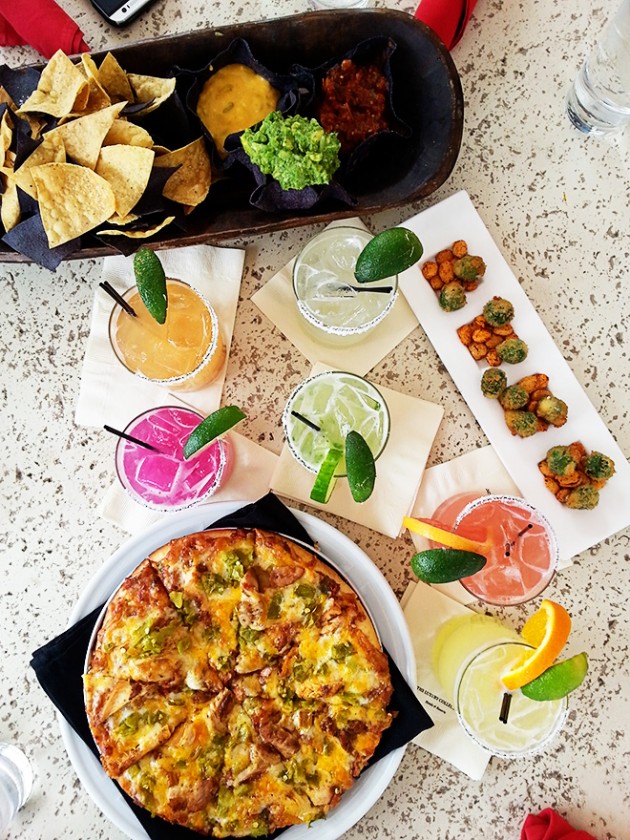 Look at the gorgeous colors of those margaritas! My favorite one was of course the Nason’s Fancy (top right one), the charred chile agave, orange bitters and smoked sea salt made it. While the Prickly Pear was beautiful in color it just didn’t have the depth the Nason’s. Runner up margarita: Chile Ristra (bottom most margarita) with pineapple puree, chipote chile-cilantro infused agave has me craving one now as I’m writing this.

As for the food – the pizza shown is a pretty standard southwest chicken and chile affair. My favorite thing above—the deep fried olives—the best snack-y bar food ever!

The Anasazi at Rosewood Inn of Anasazi 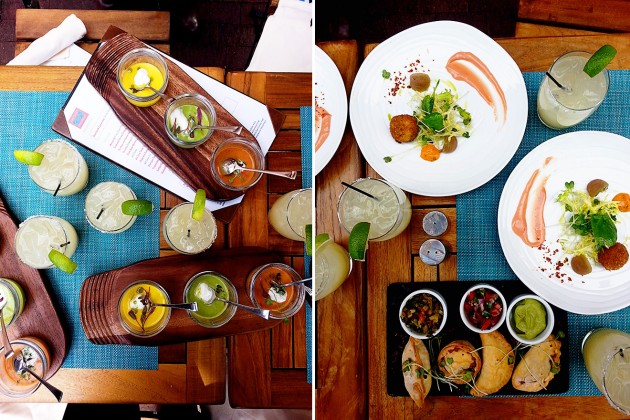 Okay, so the margaritas here were great, but the food was better. The empanadas are crazy good, the shell is soft and tender—not sodden or oily as I often find. Generally I’m not a gazpacho fan, but these (left side) were so good, I ate mine and some of Matt’s.

The small sampling here, really made me want to go back and do a full dinner, but our schedule was too tight. What I can say, is next time we are in Santa Fe—this will be one of our first stops for food. Small aside, I love that the menu’s vegetarian and gluten-free offerings aren’t after thoughts.

La Plazuela at La Fonda on the Plaza 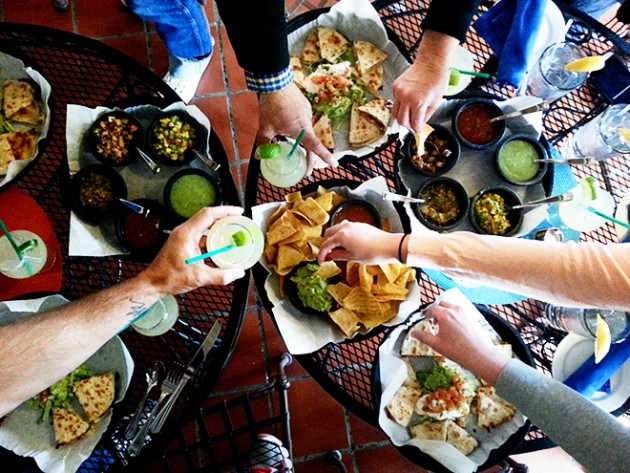 Here we are at The Bell Tower in the historic La Fonda. The Bell Tower is roof top and offers one of the best views of Santa Fe. It also served my favorite margarita of the whole crawl—nothing fancy, no herbal infusion, no smoked salt or anything—just a straight-up solid jalapeno margarita. And the best part, they even gave me the recipe. How hospitable is that?

This is the kind of place that has that local feel. Everyone is cheerful, relaxed and gives you that feeling if they weren’t working they would just as easily saddle up next to you like you are a local or freely tell you how great Santa Fe is—because that’s one thing we found everywhere we went—people are Santa Fe proud.

Luminaria at the Inn and Spa at Loretto 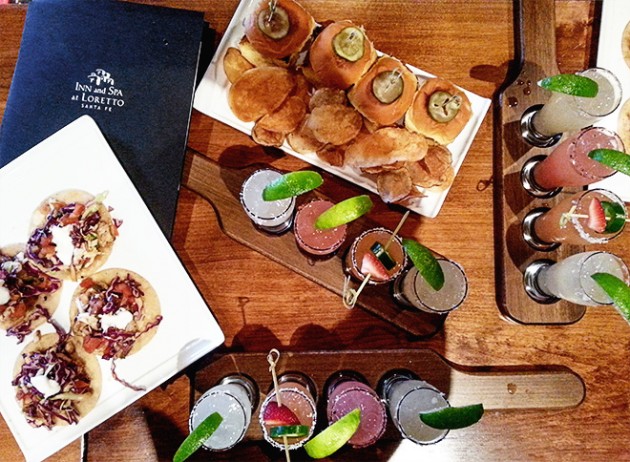 Don’t you love the margarita presentation here? And yes, they were as good as they look.

By now this the fourth stop and I was feeling it. No, not the alcohol—I paced myself and kept to tasting portions. I was feeling the food. When it came to that, my pacing was way off. I couldn’t help myself, so when the sliders and fish tacos in the above picture came out, I probably should have given it a one-bite sampling. Instead, I cleared my plate (and maybe Matt’s). The fish tacos were the best I’ve had in long while—and that is saying a lot, being that I live in Southern California, taco capital of the nation.

De Charro at the Inn of the Govenors 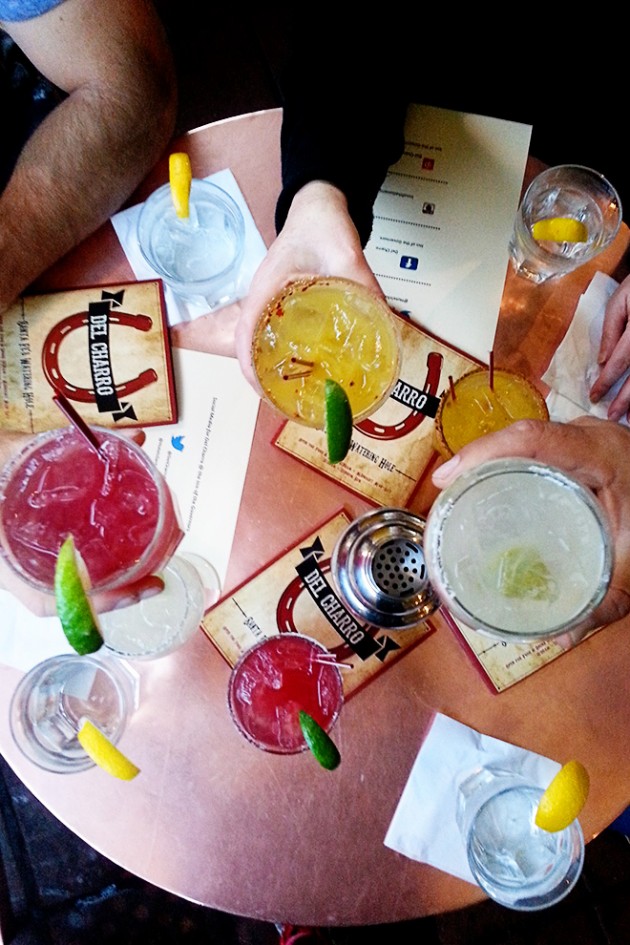 This was the fifth and final margarita stop. Like professionals, none of us were crawling. We went into this with as much enthusiasm as the other stops—for the food and drinks. This was the loudest place of them all, but that’s the way it’s suppose to be. This is the place to go if you want to have a good burger with your drink. The prices are reasonable without compromise to the food and drink served.

In fact, I’m pretty sure Matt was thankful that regular size portions of burgers came out since he need something to offset the tequila swirling around in his belly.

And finally we ended the dinner with dessert here. Here’s where I’ve had hands-down the best coconut ice cream. It wasn’t dry, it didn’t taste like sunblock, nor did it leave a lint-like feeling on the tongue. In fact it was soft and creamy with a strong natural coconut flavor.

By now, Matt had walked back to the room and I stayed on with my two guides. As we all know, Matt doesn’t do dessert so of course with his exit, I settled in for what you see above: Banana Creme Pie. Yep, be jealous, it was so good.

And that was the end of my second night in Santa Fe for the New Mexico True Flavors tour. It was an evening filled with beautiful tasty sips and some of the best food around. I’m going to predict that Santa Fe going to be the next big food scene.

Sever over ice and salted rim glasses, garnish with jalapeno.