Irish Car Bomb Cupcakes ~ Well if you have been reading you know that I have a thing for Irish Car Bombs, but only in sweets for some St. Patrick’s day desserts. 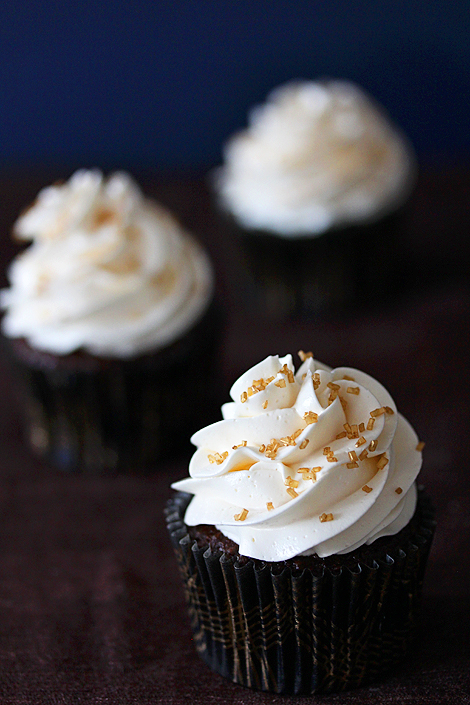 I should mention, I don’t enjoy Irish Car Bombs as a drink. I love Bailey’s and have a strong affection for Guinness, sorry Jameson-I like to bake with you, but I am not a drinker of you. The idea of guzzling an Irish Car Bomb before its expiration, by that I mean before it curdles makes my face contort in disbelief that anyone would voluntarily sign up for such a messy event.

Speaking of messy, did you happen to notice the messy noise filled bokeh in that picture? Well I finally traded in my point and shoot, Canon SX120 for a Canon EOS 60D.

Eek! I’m so excited. Actually, I guess a little over excited as you can tell from the bokeh overkill.

These Irish Car Bomb Cupcakes are built with a chocolate Guinness cupcake and then stuffed with a Bailey’s buttercream and topped with a whiskey buttercream.

I know Irish Car Bomb Cupcakes are everywhere, but I couldn’t help but make them, especially since I was already on an Irish Car Bomb dessert run with Irish Cake Balls (from last year), Irish Brownie Bombs, and Irish Cheesecake Cup Bombs , so I felt compelled to round out the bunch with some cupcakes.

Have an awesome St. Patrick’s Day, everyone!