Samoas Cupcakes ~Oh yes, the famous Girl Scout Samoas Cookie in a cupcake form.  That is, in the form of a deeply rich chocolate cupcake, covered in some salted caramel buttercream, encase that with some toasted coconut and then drizzle some chocolate on top and . . . grab a fork and open wide, Baby! 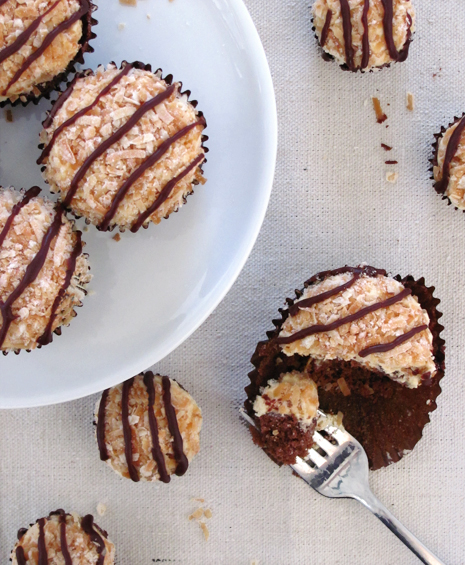 Do you ever have one of those moments where you’r e struck by an idea and you think,” O”rigin-al fo’ sure! Then you Google it and it’s not original at all. But you know what? Who cares if it’s original or not, these Samoas Cupcakes are downright cupcake goodness that will make you weep for another  . . . Ahem, no 3-year-old’s name will be mentioned here.

I’m a little crazy for coconut and caramel, so it makes perfect sense that Samoas are my favorite Girl Scout Cookie. Pair that with my cupcake love and this is what came and left my kitchen in less than 6 hours.

I made them, we ate them, we loved them and then I gave them-AWAY! If I didn’t, I’m pretty sure I would be in coconut and caramel shock especially since I still have six-yes, six boxes of Samoas Cookies stock piled.