Fall is doing its best to hold out on me. It’s gross here—hot, muggy and overcast. But I’m shaking my fist at it and moving forward with all things Fall. Like with this Pumpkin Bread Stuffing with Candied Bacon and Pecans. 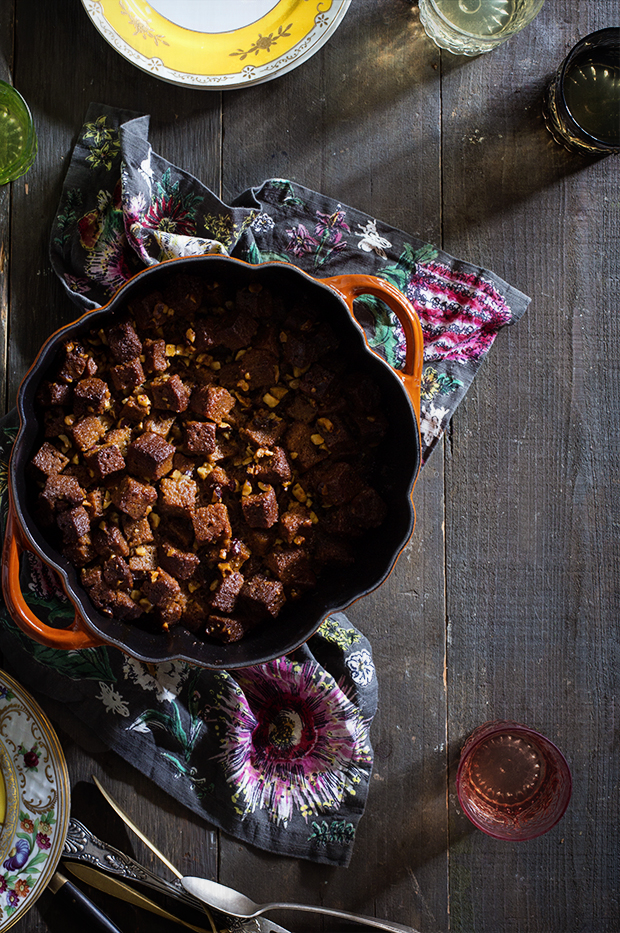 Sure it’s a bit untraditional for stuffing with its sweet profile, but traditional sometimes makes me bored. Or maybe it’s a crisis of conformity . . . sigh, that’s another conversation for another time. 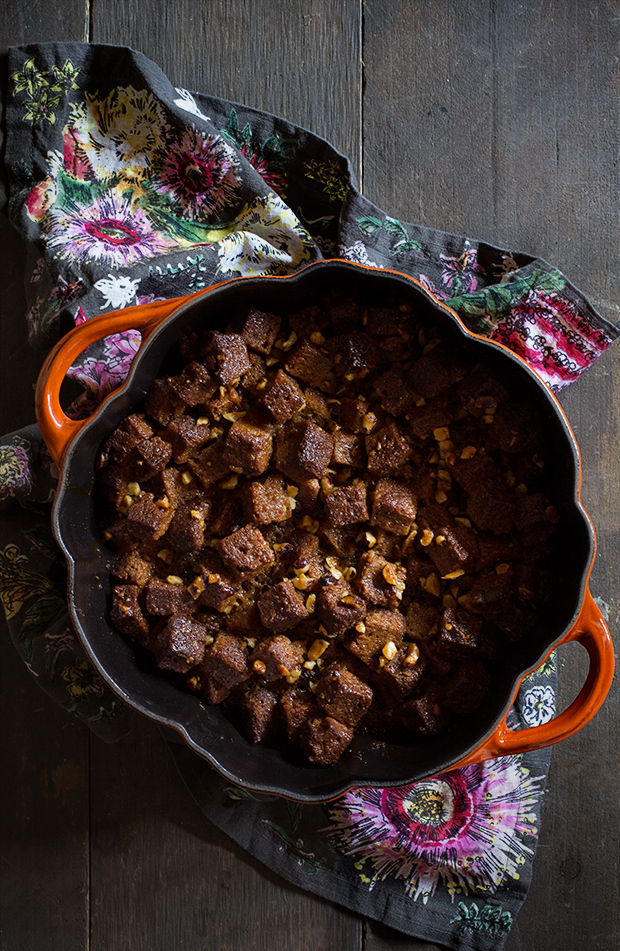 Today we are doing stuffing even if Halloween isn’t here and Fall hasn’t quite hit Southern California because the holidays come once and year and I’ve been known to start it early and stretch to January 15th! That said, I jumping ahead to Thanksgiving. But don’t be surprised if I pop back to Halloween before the month is over.

To make caramel rum sauce (can be prepared up to a week in advance): Place sugar and water in a saucepan over medium low heat and stir until sugar dissolves. Dissolve any crystals forming on the side with a wet pastry brush. Once sugar dissolves, increase heat to high. Do not stir the mixture directly. Now and then, using the handle, give the pot a swirl to keep the mixture moving. Mixture will start to bubble after a minute or so. After 3-4 minutes mixture will turn from a light amber to medium amber and finally to a dark reddish brown color. Once mixture starts to smoke, add the butter and heavy cream. Mixture will bubble wildly. Allow mixture to cool for ten minutes before adding dark rum. Add dark rum and whisk to combine. Set aside to cool completely.

To make custard: In a small bowl, combine and whisk together sugar, eggs and salt; set aside.

Place heavy cream and whole milk in a small sauce pan and bring to a simmer. Slowly add egg mixture into cream mixture with one hand, while continuously whisking the combined mixture with the other. Add in vanilla bean paste and rum and whisk to combine. Strain mixture.

Assembly: In a large casserole pan or pot combine and toss pumpkin bread cubes, bacon, pecans and cooled caramel sauce and custard. Let stand for 15 minutes, occasionally pressing down bread to absorb custard mixture. Transfer to oven and bake at 350 degrees until tops are golden.

In a small bowl combine and mix sugar and cayenne pepper; set aside.

Place bacon in a large heavy-bottom skillet, over medium heat in a single layer. Cook bacon turning once until lightly browned on edge, about 5-6 minutes. Transfer bacon to paper towels to drain.

Remove fat from skillet and return bacon to skillet and arrange in a single layer. Sprinkle Demerara sugar mixture on bacon. Cook over low heat, flipping occasionally until sugar caramelizes (be patient, this takes awhile, don't be tempted to increase the heat as the sugar may quickly burn) about 10 minutes.   Transfer bacon with tongs to parchment paper (not paper towels or it will stick to it).

*Candied bacon can be prepared a day ahead. Cool completely and store in an airtight container. Keep in mind it won't be as crisp as the day it is made made.

**This is a sponsored post in collaboration with Jones Dairy Farm. All opinions are my own.