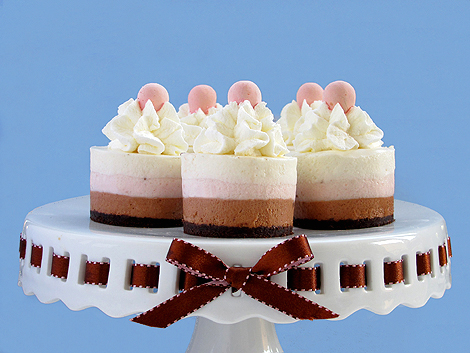 Okay, so if you have been keeping up with me then you know I’m not only on a run of mini no-bake cheesecakes, but I’m also on a Neopolitan run. After soliciting opinions on whether to make Neopolitan cupcakes, cheesecakes, or cake balls on Facebook, I got back a 50-50 between cheesecake and cupcakes.

Since I didn’t pull off the layered look I wanted on my Neopolitan Cupcakes, I took a stab at making Neopolitan Mini Cheesecakes.

OCD? Perhaps, don’t talk to Matt he will say yes for sure. I will admit, even I drive myself crazy .But the first step to recovery is admitting it, right? Well for this baker the first step is the last step – that is, baking out every darn iteration is admitting and putting that obsession to rest.

Okay, said and done. Neopolitan’s crossed off the list-maybe. I’m going to control my urge to turn this flavor into a cakeball, but darn would those be cute or what?  (Note to reader: Never trust an obsessed baker. You may see the Neopolitan cakeballs at some point).

I will be posting the recipe sometime later as, I am waiting to enter these darlings into the RWOP contest.

That’s right, Paula Deen I’m waiting for the dessert portion of your contest and then I’m going to fire these babies off to ya!

Wish me luck, everyone!