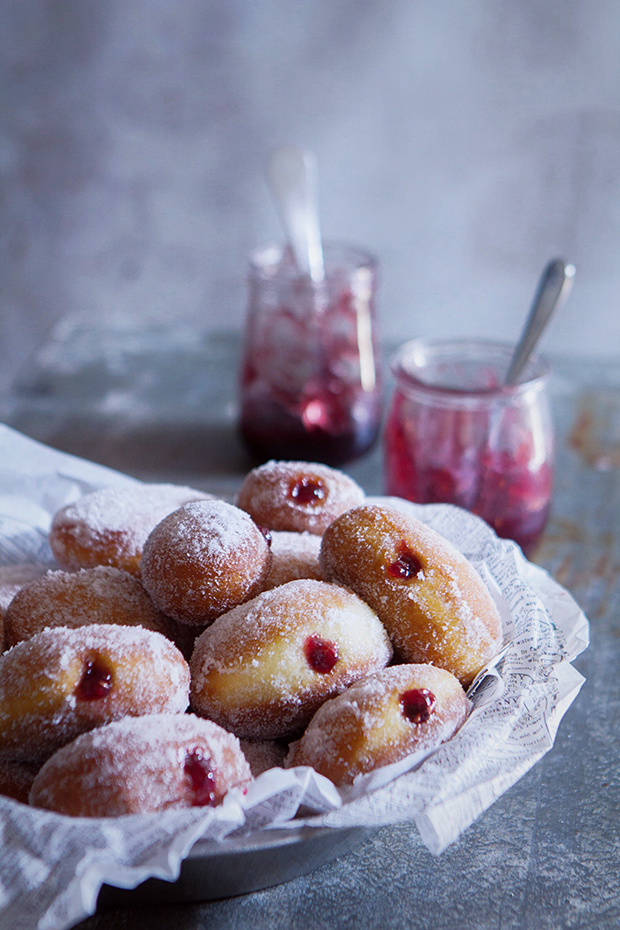 Okay, so I might be stretching it because these doughnuts require yeast while most cakes don’t; and this hardly has any butter, whereas most cakes do. But do we have to be technical? Let’s just agree that it’s a spongy-like cake with a little more elasticity. 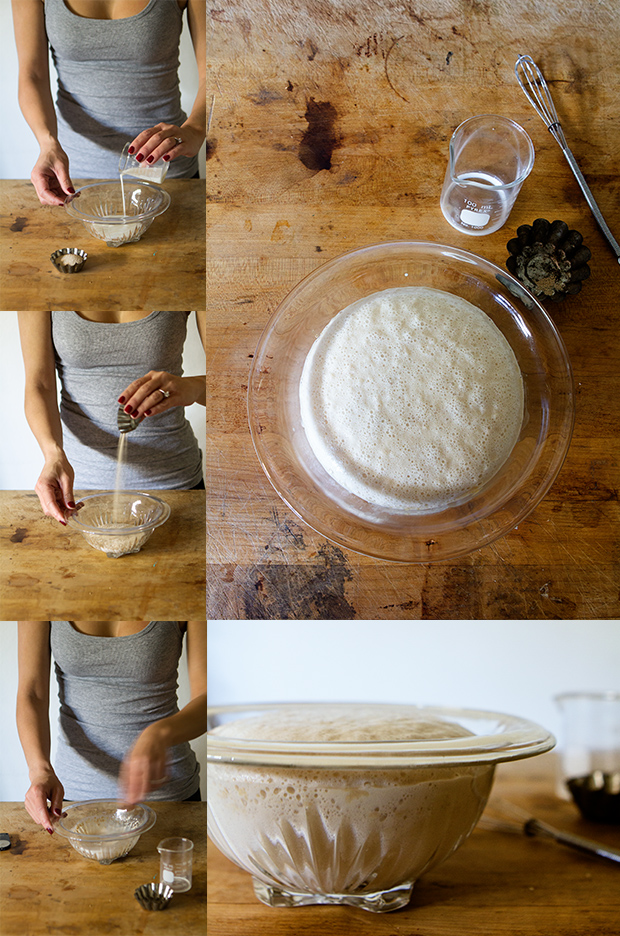 Because I even went as far as doing step-by-step photos to show you how easy this recipe is to pull off. Admittedly, step-by-step photos take a good long while to do, but I tried a video and that was a colossal failure. I scrapped it half way through. Ah well. Luckily, the pictures worked out, so really, now  you must make this. I promise it’s worth the effort. But if I still haven’t convinced you, pass this along to a friend who will make these for you, because homemade doughnuts are the awesome-est (awesomest – a real word if you play Scrabble with me) and even more awesome when they are jelly-filled. 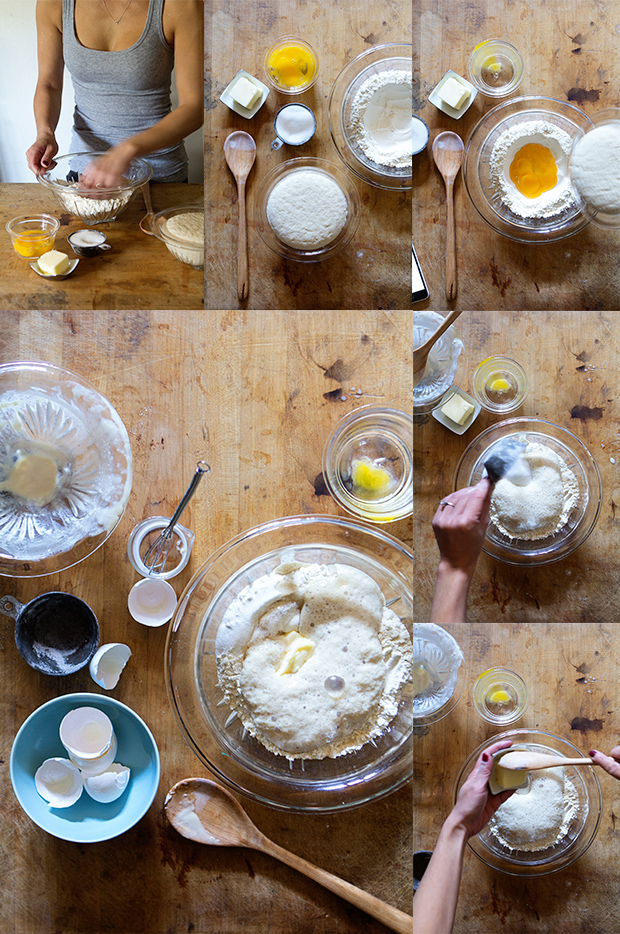 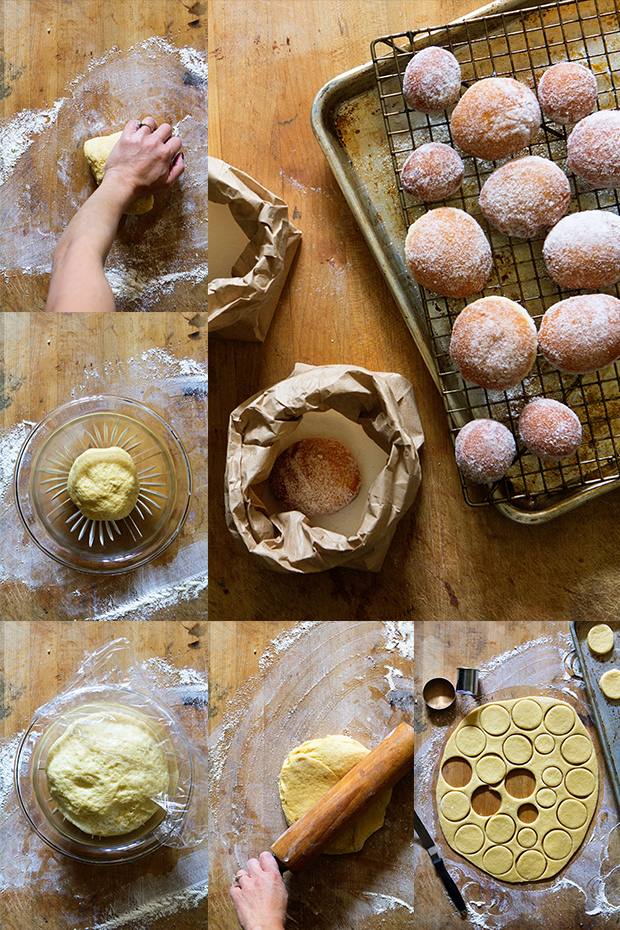 Place yeast, warm milk, and 1 teaspoon sugar in a small bowl. Set aside until foamy and doubled in size, about 15 minutes.

Place flour in a large bowl. Create a well in the center and add eggs, yeast mixture, 1/4 cup sugar, butter, and salt. Using a wooden spoon, stir dough starts to come together and is sticky. Flour a work surface and knead until dough is smooth, soft, and bounces back when poked with a finger, about 8 minutes (add more flour if necessary). Place in a lightly oiled bowl; cover with plastic wrap. Set in a warm place to rise until doubled, 1 to 1 1/2 hours.

In medium saucepan over medium heat, heat oil until a deep-frying thermometer registers 370 degrees. Using a slotted spoon, carefully slip 2 rounds into oil. Fry until golden, about 40 seconds. Turn doughnuts over; fry until golden on other side, another 40 seconds. Using a slotted spoon, transfer to a paper-towel-lined baking sheet. Roll in sugar while warm. Fry all dough, and roll in sugar.

Fill a pastry bag fitted with a #4 tip with jam. Using a wooden skewer or toothpick, make a hole in the side of each doughnut. Fit the pastry tip into a hole, pipe about 2 teaspoons jam into doughnut. Repeat with remaining doughnuts.

Adaptations I made to the original recipe:

This recipe is untraditional in the sense that it lets the yeast proof beyond just foaming. I let the yeast double in size because it makes for  a jelly doughnut that is just a bit chewier the way I like it. To keep, the doughnuts pillowy-soft stick to the original recipe and proof the yeast just until foamy, about 10 minutes.

The original recipe uses water, I use milk instead. I went for the latter because it seems to hold the heat a bit longer than water, a necessary thing when you proof the yeast to double the size rather than just foamy (this is solely an empirical observation and not scientific in any way).

The original recipe uses two large eggs, but I went for 3 large egg yolks instead for some added density and chewiness—again, if you like your jelly doughnut pillowy soft and light, stick to the original recipe and just use two eggs.

Lastly, I skipped the nutmeg.