Dark Chocolate Cupcakes with Peanut Butter Mousse Frosting ~ Bribing my way through motherhood one cupcake at a time. And this one is what good bribes are made of. 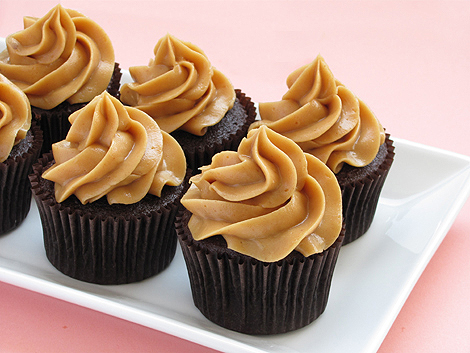 A top ten in my house, this tender crumbed dark chocolate cupcake shines even more when it is coupled with a creamy peanut butter mousse. It’s also a cupcake that I save for serious bribery when I need it.

What does one do when you are only three years into motherhood and you have an ankle biter in Target ready to have the kind of fit that would bring King Kong to his knees? You bribe him and stare down the judgmental glares of other well seasoned moms, or the worst, non-mother glares.

That’s right, bribery will get you everywhere and it got me out of Target without the both of us having a complete meltdown.

The deal I cut is what you see here. I promised my son, Cole, that if he let me finish running all my Saturday errands I would bake his special most favorite cupcake.

The foul in my bribe was when I promised him that I would have his special, baked yummies by the evening.

Thankfully, Matt can sense me coming undone before it happens and was kind of enough to offer me some quiet time by taking Cole to swim.

That was just enough time for me to re-group and bake my way back to happiness. Like most of you, baking is therapy for me.

And these Dark Chocolate Cupcakes with Peanut Butter Mousse Frosting brought the kind of smile that brings peace back into my sometimes frenzied world of motherhood.

1. Place butter, chocolate, and cocoa in a heatproof bowl. Set bowl over saucepan with two inches of simmering water.  Gently stir butter and chocolate until melted and combined. Set aside until mixture is warm to touch.
2. Whisk flour, baking soda, and baking powder in small bowl to combine.
3. Whisk eggs in second bowl to combine; add sugar, vanilla, and salt until fully incorporated. Add cooled chocolate mixture and whisk until combined. Sift one-third of flour mixture over chocolate mixture and whisk until combined; whisk in sour cream until combined, then sift remaining flour mixture over and whisk until batter is homogeneous and thick.
4. Fill cupcake line 2/3 full. Bake until skewer inserted into center of cupcakes comes out clean, 18 to 20 minutes.
5. Cool cupcakes to room temperature before icing, about 30 minutes.
Recipe adapted from Cook’s Illustrated