If you’ve been following me, you know that February is just insane for me. From work to home I’m running on five cups of coffee a day and resting on about 4hours of sleep each evening. Just when work finally stands down, my personal life begins to rev up to an intensity that parallels a thoroughbred at the Kentucky Derby. 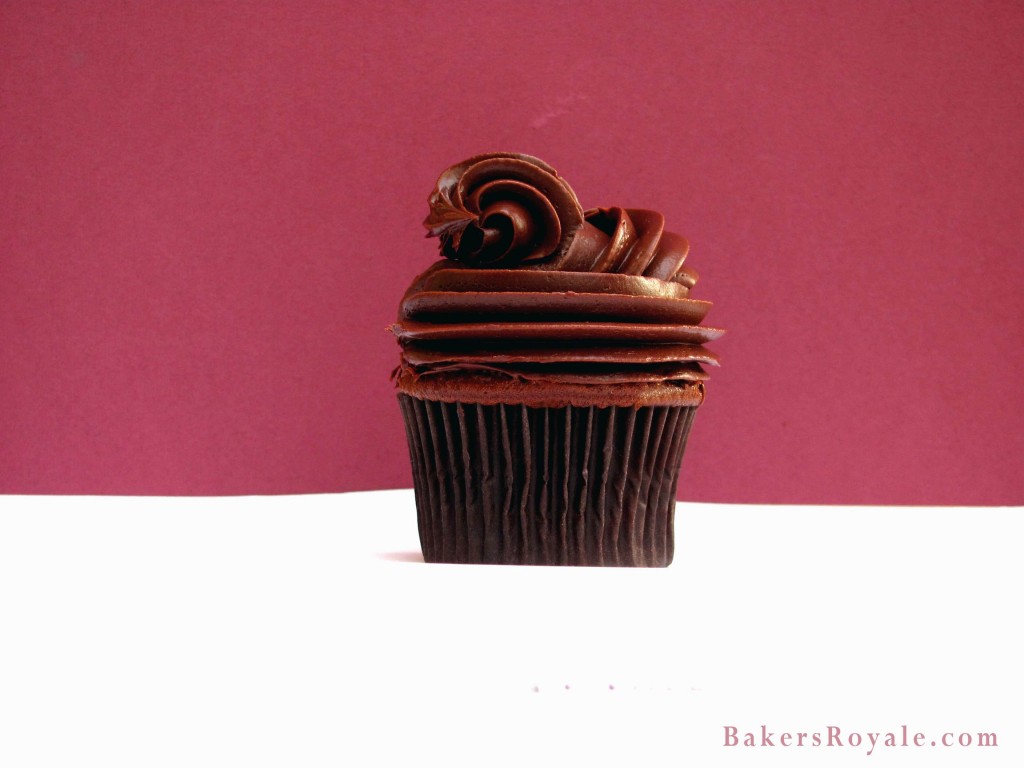 I’m on the last lap though-only two more birthdays to go. The next birthday belongs to a good a friend whose favorite drink is a Chambord Martini. After hers, is the toddler of the house. Between the two of them rattling off various cake and cupcake choices, the loading bar in the speech bubble above my head is quickly colliding with a “Fatal error” pop up window.

In an attempt to simplify things and mitigate the dizzying requests, I’ve decided taste and flavor will reign supreme this year.

The rule for 2010: Simple is the new sexy.  They are both going to have chocolate cupcakes with different frostings.

My girlfriend’s will be dressed up with some liqueur sophistication and the toddler will have a vanilla rainbow colored ganache frosting (go to my Facebook this weekend for the how-to on this cool frosting effect).

Having said that, here is my easy Dark Chocolate Cupcake with Chocolate Chambord Ganache.

2. Combine butter, chocolate, and cocoa in medium heatproof bowl. Set bowl over saucepan containing barely simmering water; heat mixture until butter and chocolate are melted and whisk until smooth and combined. Set aside to cool until just warm to the touch.

5. Divide batter evenly among muffin pan cups. Bake until skewer inserted into center of cupcakes comes out clean, 18 to 20 minutes.

6. Cool cupcakes in muffin pan on wire rack until cool enough to handle, about 15 minutes. Carefully lift each cupcake from muffin pan and set on wire rack. Cool to room temperature before icing, about 30 minutes. (To frost: Mound about 2 tablespoons icing on center of each cupcake. Using small icing spatula or butter knife, spread icing to edge of cupcake, leaving slight mound in center).

1. In a food processor, process the chocolate until very fine.

2. In a medium saucepan over medium heat bring cream to a soft boil (look for small bubbles to form at the edge of saucepan).

3. With the motor on pour the cream through the feed tube. Process for approximately 10 seconds or until smooth. Pulse in the butter. With the motor running add the Chambord.

4. Press the ganache through a strainer and let stand for 1hour. Cover with plastic wrap and allow the mixture to cool for several hours until it reaches frosting consistency.