Let me start by saying, I know maraschino cherries are not traditional on any Boston Cream Pie recipe, but these whoopie pies were begging to be accessorized. Extraneous? That depends on your taste.

If you are a regular reader of BR you know I just recently made Salted Caramel and Chocolate Stout Whoopie Pies. The recipe for the whoopie cakes took me a few runs to nail down, so when I finally turned out a batch of delicious whoopie cakes with perfect round domes – I was ecstatic.

Most of you know-for those of you who don’t, let me say I have no formal training in baking and most of what I discover and create is through learning from trial and error and process of elimination.

So here’s what I discovered . . . . the secret ingredient to perfectly shaped whoopie cakes: carbonation.

Keeping all appropriate ingredients proportional to my chocolate stout whoopie cakes, I realized the key difference was the beer. To be more exact, my thought process went with the idea that it was the carbonation in the beer that gave the batter the extra air to create the round dome. Putting that to the test I went and bought vanilla cream soda and plain carbonated water.  After three rounds of testing I can confidently report that all those bubbles will definitely leave you with some nice round whoopie cake domes. 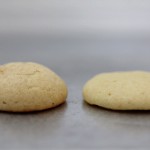 See the difference in the picture on the left? The rounder whoopie cake was made with vanilla soda—it has twice the height of the one without it. Now for the more important question – taste.  I can tell you there is only a slight noticeable taste differences between the vanilla soda and carbonated water.  That said if you don’t like the idea of soda in your batter, you can use carbonated water