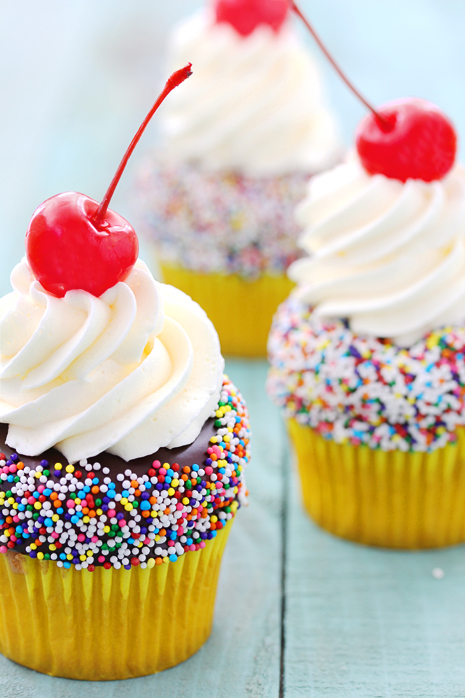 Remember these Banana Split Bites stuffed with ice cream from last year? This Banana Split Cupcake is an update of those bites but this time around I carved it between some paper pleats and sculpted it with some flour. I had to bypass the ice cream because of the melting factor, but guess what?  Stuffed it with some banana cream custard instead!

It’s actually the same banana cream custard I used in this Mini Banana Cream Pie recipe. It’s fast, easy and delicious, so don’t worry that you will have more than you need for this cupcake. You can use the extra to make any of the previously mentioned recipes (especially in the Banana Split Bites recipe if melting ice cream is a factor), or shoot just grab a spoon and enjoy!

By now, I’m sure you’re beginning to sense that I have a deep, serious love for anything banana flavored. That’s a heads up because I’m fine tuning a Banana Split Cake recipe that will be posted very soon!

Until then, I hope you love this riff on a banana split dessert recipe as much as I do. 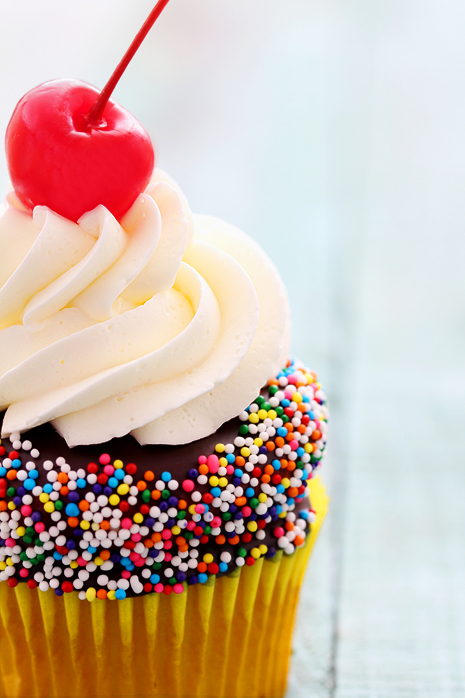 2. Add the dry ingredients in three parts, alternating with the milk, banana and vanilla mixture. With each addition, beat until the ingredients are incorporated but do not over-beat. Using a rubber spatula, scrape down the batter in the bowl to make sure the ingredients are well combined. Fill cupcake liners 3/4 full and bake for 20 to 25 minutes, or until a cake tester (toothpick) inserted into the center of the cupcake comes out clean. Cool the cupcakes in tins for 15 minutes. Remove from the tins and cool completely on a wire rack before icing.

1. Place all ingredients in a food processor bowl or blender and process to combine. Pour mixture into a saucepan over a medium heat and cook until mixture starts to bubble, making sure to constantly whisk. Continue to cook the mixture until it thickens, about 5-7 minutes, or until it coats the back of a spoon. Remove from heat and let it cool slightly.

1. Combine egg whites and sugar in a bowl placed over simmering water. Bring mixture to 150 degrees F while whisking constantly.
2. Transfer mixture to stand mixer bowl, fitted with a whisk attachment and beat on medium speed until mixture cools and doubles in volume.
3. Add butter one piece at a time, mixing to incorporate after each addition. Add salt and vanilla and mix to combine.   The frosting may appear to look separated, keep mixing and and it will come together (this commonly happens when making Swiss Meringue Buttercream.)

1. Place chocolate and heavy cream in a bowl over simmering water. Let chocolate and cream sit for 2-3 minutes to melt without stirring. Then slowly stir mixture to combine. Add powdered sugar and mix to combine. Add water one tablespoon at a time, mixing after each addition until pouring consistency is reached. Set aside and let sauce cool to warm.

1. To stuff the cupcakes: Create a well in the center of the cupcake using either apple corer, the large end of cupcake tip, or hand-carve a well using a paring knife. Fill well with banana cream custard filling.

2. To frost the cupcakes: Fill a pastry bag fitted with a large round tip and start piping from the outside working in to the center to create one even layer. Freeze cupcakes for 20 minutes before dipping in warm chocolate sauce, so that the buttercream frosting does not melt. Remove cupcakes and dip in warm chocolate sauce, and then rim with nonpareils.  Return cupcakes to freezer for five minutes for chocolate to set. Remove from freezer and finish piping frosting on top and garnish with a Maraschino cherry.