Two days ago I was ” A little bit  crazy”  –  today I’m going to be  a little  bit annoying.  Seriously, what was I thinking two blogs? Two sets of social media channel: Facebook, Twitter, Instagram, Pinterest and now Vine — times two? Pass me a Xanax. So it is with clarity and apologies to you guys for the annoyance  I’m turning off A Time to Cook and moving the savory dishes here.

What do you think? This will still primarily be a baking blog, but savory dishes will now make its way into the rotation as well. After all, I still want share all that savory fun, but I just want it contained in one place. Three years ago when I started this blog, I did do some savory but it was so spotty that it never felt right. This time around, I’ll be featuring savory a little more frequently, but not more so than dessert.

That said, here’s yesterday’s post  from over there, transferred here (with some minor edits),  so I can pull the plug on the short lived second blog . . . 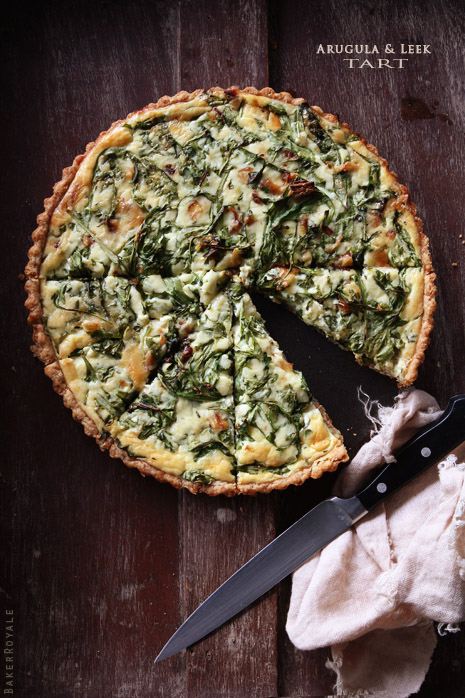 Let’s go green today, shall we? And why not? Leeks and arugula are incredible paired with one another. To back that pairing up is the nutty flavoring of Fontina cheese, and rounding every thing out is a black pepper and parmesan pate brisee. Yeah, it’s a lot of flavors and there’s a lot going on but somehow it all comes together in a quiet progression, rather than in a chaotic sort of way.

Since I’m introducing the regular appearance of savory postings, I’ll warn you – you are going to see recipes that range from semi-homemade to from-scratch recipes like this one. Along with that I should mention, don’t be surprised if I move from artery clogging recipes to earthier recipes in a matter of one post. You’ll quickly see I don’t discriminate when it comes to food. 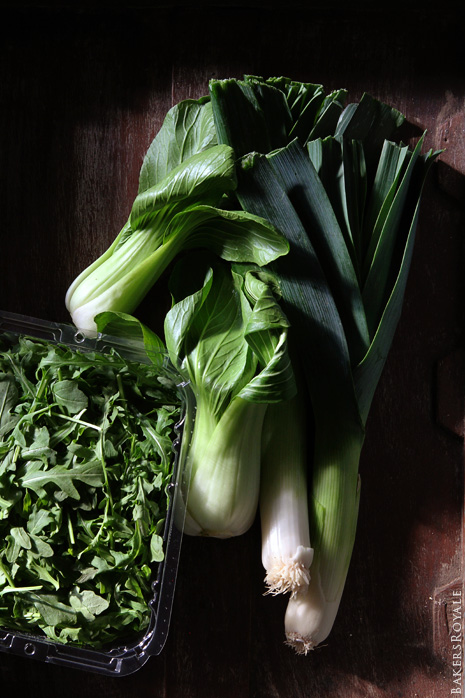 Alright, now that we have our expectations set-up with one another, let’s talk more about this tart. The first run included bok choy – hence it being photographed in the picture, but since it didn’t add much to the recipe I removed it in the second run. Since then I’ve made this recipe with spinach, grilled raddichio, and swiss chard. It’s highly adaptable, so play around until you find your preferred filling, just don’t leave out the crust.